Day four of laying in bed with the October chest-cold-from-hell sounds like a decent time to give some love to the blog and write up a race report for one of my now favorite events, the Overlook Endurance 50k run.  There are a few good things to being sick; forced days completely off your feet, catching up (or bingeing an entire) HBO series (Crashing, in this case), and hopefully getting some writing done.

I’m at the point in my life where I am trying to run on the Western States trail whenever I get a chance.  Unfortunately it’s a bit out of the way for a regular weekend spin, but I am lucky enough to live in the range where I can hit it up for local races.  Canyons, Ruck a Chuck, and Overlook have all been on the list in the past year, and hopefully one year in the future I will be able to round it out with the Big Dance in June.

Overlook was Ann Trason’s brainchild and up until this year she was the Race Director in charge.  I first ran it in 2016, but due to record high rains and a wet fall the course was re-routed and significantly changed.  This year would be my first time on the real Overlook course, which closely mimics the last 50k of Western States from Foresthill to Auburn. The 50k race bombs down Cal Street to Rucky Chucky, then follows the Middle Fork of the American River before crossing the river at Poverty Bar (a few miles downstream from the Western crossing).  It then continues onto Quarry Road, across No Hands, and then over Robie Point before finishing at the American River Canyon Overlook Park.  In 2017, Chaz and the rest of the Canyons Crew took the race over from Ann and really did a phenomenal job that I’m sure made her very proud.

I had told myself that this wasn’t necessarily an “A” race for me, but at the same time I got a nice 6 week injury-free training block in and was feeling fairly strong.  I had talked my buddy Enrico into running his first 50k (although he had done a couple of marathons before) and we cruised up to the suburban Sacramento area the night before to sleep a bit closer to the start line as well as get some grandparent and cousin time.  We made an early departure, caught the 6:30AM yellow school bus shuttle to Foresthill, and had some time to kill at the elementary school before lining up for the gun.

I was probably most excited to run the Cal Street portion of the course with fresh legs, as in both Ruck a Chuck and Canyons they had been a bit worked by the time I hit the descent.  It was as good as I imagined – I started off at a brisk pace, keeping with the lead group down the paved stretch as I wanted to hit the singletrack in good position and not get bunched up by the pack.  My new Speedgoat 2s felt dreamy (although more on this later), and I gave myself the mental green light to bomb the descent as long as I didn’t get into too much trouble.  I backed off a couple of times, as various muscles got tight, but overall felt like I did a pretty good job.  I had been working on downhills, and while I probably should have eased up a little bit, it was sooooooooo much fun.

The stretch to Rucky Chucky was great.  I chatted with a few folks along the way, got some fishing beta from a local (hike up as far past the rapids as you can), learned that there were no hills to train on in Michigan, and then….  I MET GORDY!  This was my first Gordy sighting in the wild, and he was haulin’ on the downhill, no shirt, beard blowing in the wind, carrying a full bag of sliced bread and a metal water bottle as his only supplies.  I chatted for a few moments, long enough to learn that he had been given an hour head start on a friend from Foresthill in a “handicap race” lol.  I wished him luck and continued the descent trying to embrace the full magic and mythology of the amazing Western States trail.

The river was gorgeous as always and the day began to heat up.  It seems I always have some significant drama going on in my life when I come run the WS trail, and this trip was no different.  I had just survived one of the worst weeks at work in a very long time, and it became immediately evident how helpful it would be to just worry about my breathing and steps for five hours on this Saturday morning.  When my life is complicated running really is the only thing that can clear my mind, especially when I push my body to a point where it has no other options.  Strength, Fluidity, and Breathing was the mantra that popped into my head as I gazed upon the water flowing by and marveled at how it could be so still, so slow, and so strong at the same time.

It’s always good to see the folks at Rucky Chucky and I topped off my bottles and Gu stash and headed up Driver’s Point road.  I was a bit confused for a minute as the 30k merged with us, ran toward us for a bit to the aid station, and then turned around and chased us to the river.  It’s always tough when folks from a different race at a different point in their day join you, but it was nice to get a breath of fresh energy (although a bit frustrating to see their fresh legs!!)

We meandered along a beautiful part of the Tevis Cup trail before descending to the river at Poverty Bar.  Besides Cal Street on fresh legs, this was the part of the race I was most excited for.  I had never been across the river before!  There was a rope set up, and the crossing was wider than I had expected in my mind.  The slow moving, freezing cold water was up to my waist and I took my time wading across, holding on to the rope for a bit of guidance.  There really was no danger of floating away but it seemed like the right thing to do.  The cold felt amazing on my legs and my toes were numb by the time I got to the other side..

My body felt good and all systems appeared to be a-go as I hit the Quarry Road stretch.  I settled into a nice rhythm and was able to run 95% of the rollers through this section.  I felt better than my mind remembered I did in the 2016 version of this race (where we ran to Poverty Bar from Auburn, turned around, and came back) so I pushed it a little bit more up to the highway crossing and the short stretch after to No Hands.  I cruised into No Hands still feeling good and the aid station volunteers were incredibly supportive of my efforts.  I was in and out quickly, but as I left one guy yelled “You’re top 20 if you keep it up!”

From No Hands to Robie Point seems to be the crux of this section to me and this day was no exception.  When I finally do Western I’ll have to slay this mental demon once and for all.  It was starting to feel a bit hot and my hammies were getting tighter and tighter.  I had F3 in view about 60 seconds ahead of me, and for the life of me I couldn’t put any time into her no matter how hard I tried.  I battled the last 5 miles or so of the course – trying to stretch the hammies while I was running and also trying to keep forward moving progress.  The arbitrary 5 hour finish mark was floating in my head in bright red numbers by this point – While my previous 50k PR was 5 hours and 9 minutes, I had yet to break 5 hours and I was really hoping it was going to happen today.

Despite the pain and suffering as I began to finally crawl into the pain cave, the remaining miles ticked down and the time kept ticking up.  I didn’t know exactly how long the course was, so at 30.0 miles I still had a goal of 5 hours in my head – it was doable, maybe, but I had to keep pushing.  Unfortunately, with the finish line antics in ear-shot, my every-30-minute buzzer on my watch went off, signaling that while I hadn’t made 5 hours I was pretty damn close.  I crossed the line in 17th overall, at 5:01:22 – a PR by about 8 minutes and a day-long pace of 9:50 miles.  I’ll take it!

Nutrition – my nutrition seemed on point, despite taking in less solid food than usual and even a few bottles of Gu Roktane Summit Tea as calories (man it tasted good).  I followed my usual rule of eating what looked good at the aid stations and trying to be flexible.  It would be nice if this pattern continued, however, as it really is a lot faster to just cruise through the stations grabbing Gu than PB&Js.

Quick Aid Stations –  Strava has me stopped for a total of 6 minutes throughout all of the aid stations, which is a record for me by a long shot.  I’ve come a long way from my first 50k where my coach instructed me to rest at least 5 minutes at each aid station and not leave until I made every volunteer laugh at least once.  I still try to make everybody laugh, and can usually succeed – maybe my pirate jokes are getting better?!?!?!

Heart Rate – I wore my heart rate monitor for the entire race because my fitness had been feeling good and I wanted some data for an upcoming road-speed training block.  I gave myself limits of 160/165/170 and unlimited as the race progressed, and I feel like I nailed this plan pretty perfectly.  I still don’t know if it’s the best way to a well-paced effort (and I likely never will after witnessing Bob Shebest crush Canyons 2017 sans watch), but it’s familiar to me and does ensure that I don’t blow up too early.

My Speedgoat 2s – oh Speedgoats, how I wanted to love you so badly.  You were the fastest shoes I’ve run in, and so comfy on the downhills….. until you weren’t.  They are just too narrow for my feet, and while they were okay for short training runs the abuse of a 50k was just too much.  I had to ladder lace them to get a little more width, which led to loss of control of tension in the laces, which led to multiple hot spots and two toe-nails that I will likely lose at this point.  Thanks for the PR, but you’re goin’ back to REI.

And for those of you keeping score – Enrico crushed his first 50k with a 5:27 finish as well.  A good day was had by all in the mountains! 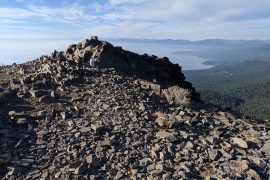 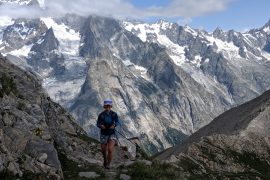 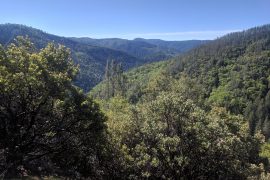