I first met Lucas in the fall of 2016 at the re-routed Overlook 50k race in Auburn, California. Due to tons of rain that season the crossing of the river got scratched and it turned into an out-and-back meander along the American River. I was having a great day on the course, making good time through the cool and misty fog, and matched strides for a bit with another guy just after the turnaround. I couldn’t help but notice his blue and white SS 50/50 trucker hat – especially since I was wearing the exact same one! It was the swag handed out at the 2016 Silver State 50k and 50 Miler in Reno, Nevada, the site of my first ultra distance run a year earlier. The goofy guy underneath the cap was of course the one and only Lucas Horan, and we ran most of the return trip back to the finish line together, talking the entire way. I struggled to keep up at points but his stories and energy were so captivating that I just couldn’t let him go. He recounted his finish of the 2016 Silver State 50 Miler (his first ultra) – a slow backside of the course filled with whiskey shots and lots of laughing, and then eventually careening toward the finish line as DFL. Before leaving Auburn we exchanged numbers – it turned out he lived on a boat in the marina in Emeryville, just a stone’s throw from my house in Berkeley.

Over the next four years Lucas became one of my closest friends and most consistent running buddies. He was always down for a run or an adventure, and had a special knack at connecting very deeply with you in a short amount of time. A typical run with Lucas would start with some random running talk about shoes and gear, and then progress to routes, dreams, and adventures that he was scheming on maps, on Strava, and in his head. Around the hour mark things would usually turn a bit deeper – relationships, family, goals, love, feelings. Lucas was never one to terminate a run or a heady conversation, so the longer we ran, the deeper we got. One gift that ultra-running gives to us all is precious, focused, conversation time with friends in beautiful wilderness, and I cherished my moments like these with “Crazy Lucas”.

I was not the only running partner that Lucas had – far from it, really. After getting to know Lucas more and more, I realized that the running was only a small part of the obsession for him. His running was a medium to form bonds and relationships with fellow humans on a similar path. He literally had hundreds of partners and friends in cities and mountains all around the world. And he had the incredible ability to form real and lasting connections with these folks, even after a short jaunt out on the trails. Lucas was unique in his authenticity and enthusiasm in a way I have never seen in another individual, and while he was far from perfect (aren’t we all?), there was no bullshit or being fake with him. To be around someone like that is always a gift.

One of my favorite Lucas stories involves our family southbound thru-hike of the John Muir Trail in the Covid Summer of 2020. My wife, two kids, and I took off from Tuolumne Meadows on foot, with a goal of climbing Mount Whitney five weeks later, picking up and hiking out for resupplies along the way. As we neared LeConte Canyon and Bishop Pass my body was really starting to feel the miles – we parents were loaded up with food and weight in an attempt to actually make the trip a success for our 8 and 10 year old boys, and it was beginning to take its toll. I texted Lucas from our GPS device two nights before our scheduled resupply, asking if he thought he could make it to the East Side and meet me at Parcher’s Resort to help haul in the load. I have no idea what was actually on his calendar, or work schedule, but in typical Lucas fashion he dropped everything he had going on and made a journey to the mountains. I headed down the pass early in the morning and found him just waking up from his car in the parking lot at South Lake, with a bag of requested burritos, a replacement cooking pot for ours that rodents had destroyed the previous evening, and of course a head full of stories and energy ready to fuel us back up the climb.

Lucas was an expert pacer, and in fact sometimes I felt that he enjoyed the role of guide and motivator even more than being an individual runner. Our trip back up and over Bishop Pass was no exception to this rule. I was fatigued and carrying a 60 pound pack full of food and yet we floated up the climb and into the backcountry with ease. We made better time on the climb back up than I did on the descent, and soon enough we were posted up at our off-trail camp sharing a meal of fresh trout and mango salsa together on a slab of granite, now a family of five.

After dinner we all began staring up at the high ridgelines and peaks behind our campsite that surrounded Dusy Basin. We were preparing to head up and over Knapsack Pass for the off-trail portion of our adventure the next day. Lucas was planning on throwing his hammock up in a nearby tree before escorting us up and out of the basin in the morning and then returning to his car, which he had left in a 15-minute parking spot at Parcher’s after assuring the woman at the counter that he was “just going to head up the trail with my buddy for a bit”. Lucas’s attention turned to a prominent peak just across from Knapsack Pass, and he began to try to scout a line up to the top. We could all see a large precarious block on the ridge just before the peak, and Lucas turned to our eight year old Devin to ask him how he would approach the line.

We were sitting at camp and looking up at the ridge line that creates Dusy Basin. Devin noted a huge block making an obvious overhang from the ridge. Was it a car? a spaceship?? I pointed out the gradual ridge that led to a couple of “giant’s steps” before the precarious block. Devin said he would take the “avalanche gully” up to the steps. In that moment I can’t say I fully trusted the mountaineering judgement of an 8 year old! However, after 22 days immersed in the John Muir Trail I wondered how much of the Sierra Mountains’ whispers he had let become part of his spirit and intuition.

Our family was exhausted and we quickly collapsed in sleep (My wife Maureen had also managed to break three fingers in her hand that night, but that’s a different story for a different day). Maureen and I woke up at some point well after midnight to crawl out of the tent and use the bathroom, and while gazing up at the starscape we noticed a headlight way up on the ridge near the peak we had all been eyeing before. I felt a bit of empathy for the climbers that were surely epicing up there right now – I hoped they were able to descend safely and get warm soon. Maureen had a different premonition that she didn’t share until the morning, and we crawled back into the comfort of our bags and went back to sleep.

In the morning Lucas eventually crawled out of his hammock after we had finished breakfast and had our things packed up for the day. He looked groggy as I recounted the climbers we had seen up on the peak the night before, walking straight into the punchline that was Lucas Horan. Maureen shared her feelings that it was actually Lucas who had gone up there after we had fallen asleep, and of course he confirmed that it was indeed him that had made the trip. Devin had been exactly right – the gully was the best approach, and put him into a “5.7 crack system” that he climbed in his Altra running shoes before gaining the ridge and heading for the peak. And so we sat in awe of Lucas while frightened for his well-being at the same time – a feeling that those of you who know Lucas well have surely experienced before and are all too familiar with. The fact that he trusted the advice of an eight year old before he set off that night, the fact that he never mentioned to anyone where we was going or what he was doing, and the fact that he somehow made it back alive – it was all textbook Lucas. We of course lectured him for being stupid and tried to convince him to start carrying a Garmin In-Reach, Spot, or some other personal locator beacon on his adventures so we wouldn’t all be so worried about him. But Lucas wasn’t having any of it, and he made it clear with the clarifying questions that he was asking – “Wait, so I pay them a monthly fee so that people will know exactly where I am when I run off the grid into the backcountry? Nah, I’m good”.

And of course that was the magic of Lucas, the same magic found in mountaineers and adventurers all over the world that are cut from the same cloth. The never-ending curiosity and search for something bigger than you, a deep spiritual pursuit that takes you to some of the closest and farthest and most beautiful places on our planet. Lucas didn’t just live this life in his running shoes, but in all dimensions of his life and work. He was a brilliant biochemist that spent a lot of his brainpower engineering lab experiments and reactions that would hopefully lessen the suffering of cancer, and eventually Covid, from his Emeryville lab job. Who else in this world could assemble a birthday dinner that would bring together everyone from Nobel Laureates to master chefs to finance and non-profit gurus to yoga and high school teachers all around the same table?

While my heart is broken at the loss of a dear friend and companion, I will bring a piece of Lucas with me on every single trail I run for the rest of my life.  A trip up to Vollmer will really be a pilgrimage now, a descent down Side-O like running with a friend.  My next trip through the Alps will be in memory of his TWO Tor de Geants finishes, and the next night run I’m on I may just have to turn my headlight off and throw myself blindly down the descent, Lucas style. Many religions have a concept of “divinity in everything” – the idea that everything is sacred and that God is actually each one of us. Despite leaving us way too soon, Lucas has made some of these things sweeter for the ones he knew. If that’s not a metric of a life well lived then I don’t know what is.

Lucas was eternally searching for something, and I hope that he has finally found what he was looking for. Run in Peace my friend. And thanks for that beautiful sunrise and rainbow that the Bay woke up to on Christmas morning. We love you man. 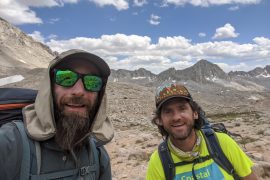