Whew!  After a whirlwind of a week we finally arrived in Chamonix-Mont Blanc.  We picked up the grandparents at the aeroport in Paris, spent two nights in the Loire Valley seeing long lost cousins and visiting chateaux, and buzzed down the auto-route (pausing for a 3 hour lunch of course) to Chamonix.  The trip was mostly smooth with a few bumps in the road – in an incredibly obvious lesson of standard deviation, it soon became apparent that a road trip with a 5, 8, 73, and 82 year-old is entirely different than a road trip with four 42 year-olds.

Believe it or not, we’ve spent more time in Chamonix over the past seven years than we have anywhere else in France.  In 2011 it was our first big stop as we through-hiked the GR5;  Sage was just a baby in our pack and we attempted to wait out the weather cycles to no avail while visiting my wife’s uncle.  In 2013 we posted up for a few weeks with my wife’s sister and her family while hiking and exploring amidst magnificently clear skies (both boys in a pack at this point!).  In 2015 we rented a wonderfully cute chalet in Les Bossons, for the grand total of 900 euros for the month of July.  Here, with the younger kid in the pack and the older one walking, we discovered the secret of putting them in French mountaineer day-camp so we could take to the hills in freedom.  And now in 2017 we have the whole fam damily here and are staying in the biggest chalet thus far!

It’s no wonder that I found my passion in trail-running with so much time spent in the trail-running capital of the world.  Our first visit to downtown Cham was overwhelming to say the least – every outdoor, mountaineering, and climbing company worth their weight in carabiners has a flagship store on the main strip, and everywhere you turn euros in Scarpas with ice-axes slung over their shoulders are sipping beers while boasting of the day’s events.  At first glance it looks like a town full of a bunch of mountaineer posers – and then you realize that actually everyone is doing some really bad-ass stuff.  Part of French culture is definitely jumping feet-first into things that Americans might wait to become experts on, from mountaineering to rock-climbing to spear-fishing.  It’s a somewhat disconcerting phenomenon at first, and yet most people somehow don’t die and instead end up with some whoppers to tell.

I traded my climbing gear in for trail-shoes a long time ago so I have a lot of high altitude sky-running loops in mind for the next month.  We’re trying to ease in a bit, however, while also juggling the demands of caring for 4 people (5 if you count my wife’s “little” brother) and get our adventure on.  The kids start camp next week so if the weather cooperates we hope to get some quality outings in.

This morning I decided to explore how much vert I could reasonably get from our chalet and still be back in time for 9:00 AM breakfast.  I took off toward the Les Bossons glacier, a massive wall of ice slowly creeping down from Mont Blanc while simultaneously giving way to climate change.  The trail was up-up-up – I worked on my power hiking skills and just grinded away, wishing I had done training like this before Canyons.  The singletrack was buttery and at 7:00 AM there was literally no one else on the trail.

I forewent my pre-run coffee with the promise of a cuppa at my turnaround point, Les Chalets des Pyramides.  It’s from here that the hard-core climbers headed up Mount Blanc keep going up to get on the final shoulder leading toward the summit (hard-core because the vast majority take the Aiguille-de-Midi telepherique up instead!)  87 minutes of climbing and I was at the hut, and the first customer of the day.  I excitedly gulped down my large Nescafe (hey instant coffee is better than no coffee at all) and began the glorious descent.

The legs held up well on the kilometer-plus of downhill and it was then that I began to encounter the hikers of the day beginning their ascent.  I cruised back to Le Grand Chalet just a few minutes past 9:00 as the rest of the house began waking up and making coffee.  The little jaunt got me stoked for the bigger stuff ahead and my brain got a desperately needed injection of dopamine to mellow me out.  With weather moving in this next week, we’ll have to get a bit creative, but I’m optimistic of the trails that lie ahead! 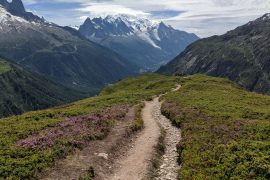 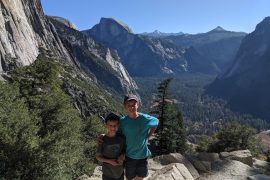 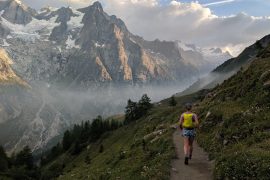