There is a long list of things that immediately surprise you upon your first (or second, or third, or thirtieth) visit to the Chamonix Valley;  the massive blue and white glaciers all around, the web-like network of telepheriques connecting valley to peaks, the incredible steepness of trails, and yes, the ubiquity of hiking poles.  Everyone has them, including runners, so much that in a Bizarro-world paradigm shift you immediately begin to question whether you need a pair too.  This trip we questioned so much that we bought a fancy new set of Black Diamond Carbon Fiber Z-poles, weighing a mere quarter pound each, and folding up small enough to stash on the side of your running vest.  My wife started with them, swearing they were powering her up the unrelenting ascents, and then I stole them one morning for a quick 1000 meter climb up to the Plan de L’Aiguille, where they blew my mind.

What a gamechanger!  They changed a brutal slog up switchbacks into a thing of grace and beauty – I could click-click-click up the climb as a quadruped instead of hunched over trying to power everything with my glutes.  They were brilliant on the flats, where they were so light I didn’t even notice I had them, except when I used them for a fine point of balance like a tightrope walker high above.  Perhaps it was the runner’s high, or the amazing flow of the trail, but the run left me thinking:

Why don’t we use these in the United States again?

I posed this question to Reddit (thanks /r/trailrunning!) and together with some of the most brilliant running minds across the globe we came up with the following:

7 Reasons Why You Shouldn’t Run With Poles

I must admit, every time I thought about this pole dilemma, this was one of my biggest concerns.  They really are perceived as dorky in the US.  Once you dig into this argument even a little bit, however, you immediately see that it’s complete rubbish.

First of all, how can you call something dorky when you’re already a long-distance runner?  It’s no secret that our sport is about as dorky as you can get.  There are no ultra-runners gracing the cover of Sports Illustrated, and most “professionals” are lucky enough to scrape up a free pair of shoes here and there and some comped entries to races.  We’re not winning any cool points to begin with.

When I was running the Canyons 100k in 2017 (a race where I would definitely bring poles next time!) I was keeping pace the entire day with a gentleman running with poles.  I admit he wasn’t the most fashionable runner – he had on a long sleeve shirt, some frumpy looking shorts, and a floppy wide brim hat for sun protection.  And he had poles.  He was destroying everyone around us every time we hit a gradual uphill grade, and we would eventually catch him on the downhill just in time for him to tear away from us again.

When I came through the Cal 2 aid station on my way back up to Foresthill I passed another camarade that had fully cracked and was about to walk it in.  As we said our final goodbyes he grabbed me on the shoulders and with every ounce of seriousness said “Whatever you do, catch that F#!ker with the poles!”  I took this directive as a mission and put the pedal to the metal until Cal 1, where I actually did catcht he f#!ker with the poles.  And then he passed me on the final climb to Main Street, click-click-clicking away.

2.  Americans don’t have a background in Nordic skiing

True dat.  Growing up in New Jersey I definitely don’t have a background in Nordic Skiing.  Vernon Valley Ski “Resort” had an elevation gain of about 287 feet.  But I will admit that when I am carving running descents with fancy poles it does feel like I’m skiing!  A little bit.  Kind of.
Do Europeans really all know how to Nordic Ski?

Yeah, we definitely shelled out for our fancy set of Black Diamond Z-Poles.  But they’re sooooooo light.  And we have only bought one pair so far on the trip because they are so expensive.  I have been running with a set of normal, telescoping trekking poles that we already had, and it honestly hasn’t been that bad  They’re not nearly as nice as the Black Diamonds, but they work just fine.

Rumor has it that a finisher at the Barkley Marathons this year did it with a set of mis-matched regular trekking poles he bought used at an REI garage sale.

Here’s the thing – you’re already in a sport where the gear costs are not too high other than shoes.  So you can either keep them low and grab a pair of budget poles, or splurge a little and get a nice set.  Come on, treat yourself!

4.  There’s just not enough elevation gain in US races

This is probably the most valid point I came across and worth of a further look.  Besides everyone walking around with trekking poles, the next obvious thing that you notice upon arrival to Chamonix is the ridiculous grades to get out of anywhere in the vicinity of the valley.  After a month here I consider an “average” climb to be 1000 feet per mile.  You can very easily rack up 10,000+ feet of gain in a 5-6 miles stretch here, no problem.  That, my friends, is some vert.

What’s the crossover point where it’s worth bringing poles for the climbs?  I’m not sure honestly.  I definitely want them for 1000 feet per mile.  I’d want them on any long climb over 2 or 3 miles.  Heck, I would want them on a loop through the Marin Headlands just so I could click-click-click up Marincello or Hill 88.  But yeah, it’s got to be pretty hilly or technical, and not every race meets that requirement.

What I do like about the ultra-light poles, however, is that they really don’t penalize you for carrying them on the flats and the downhills.  I actually really liked using them on technical flats for extra balance and maneuvering.  On technical, rocky, or rooty downhills they are invaluable.  And anywhere else you can just fold them up, stow them in your vest, and forget about them. 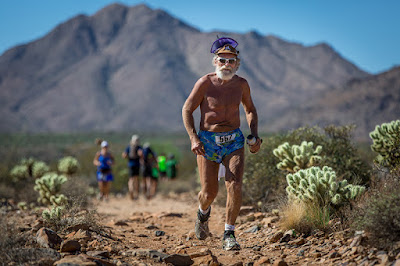 6.  They are too heavy or too cumbersome

This depends on what poles you have obviously, if they are the right size for you, do they fold up or telescope, etc.  While they may not be heavy they are certainly another system to manage – you not only have to be constantly thinking of where your feet are going, but also where your poles are going.  They can get tangled and they can hit other people and racers too.

We are spoiled in the US with our ultra-marathon aid stations.  They are rarely more than 5-6 miles apart and they are fully stocked with water, electrolytes, chips, Paydays, Redvines, quesadillas, and anything else you could imagine.  European races don’t have this luxury – often they can only physically get supplies into a race at spots 10-15 miles apart from each other.  Additionally, many European races have long list of required equipment that a runner must bring – emergency blanket, bivy sack, extra water, long pants, etc.  If you’re carrying all of this stuff, you’re already carrying a vest, and you might as well throw the poles in too.

There they are – the 7 (tongue-in-cheek) reasons why runners should not use poles.  If you haven’t tried a run with them yet, it might not be a bad idea.  Dust off your old REI trekking poles, go find a nice long 1000 meter climb, and get to it!  You’ll thank me later. 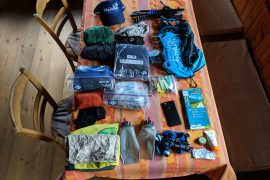