The hardest part for me of the ITBS injury that crept up after the Marin Ultra Challenge 50k was throwing away the wonderful training plan that was going to get me smoothly in shape for Canyons.  I had engineered a nice steady build with a peak week the first week of April, which also coincided with my Spring Break from school.  In my head I was going to drop off my kids every morning for their school and go hammer the East Bay climbs all week.  It was going to work out so perfectly!

The best laid plans of mice and men….  My injury was still nagging me a bit on the last day of March, and while it seemed to be headed in the right direction, it definitely didn’t feel like a good idea to bust out a 50+ mile week right then.  I was having a hard time wrapping my head around what I was about to do with a week off from work and the inability to run, and then it hit me – what if I called my best friend on the East Coast and tried to convince him to go on a backpack in Joshua Tree?

Joshua Tree is one of my favorite spaces on the entire planet and we’ve been going down as a family 3-4 times a year for the past two decades.  What started as an obsession with climbing the rocks in the park before we had kids has continued as an obsession with spending as much time in the beautiful desert as we can, scrambling, hiking, running, and looking for hidden habitation sites all over.  Unfortunately the LA hipsters have discovered it as well (thanks a lot, Coachella) and visitors have shot up exponentially in the last few years.  It’s a long way from the no-camping-fees National Monument of the nineties, and it’s getting harder and harder to find a campsite and avoid the major crowds unless you are willing to get off the beaten path.  Luckily, I was.

I called my buddy Greg and pitched the idea – it was a route I had been scheming for a while.  We could through-hike the California Riding and Hiking Trail across the park, dropping water caches the day before so we didn’t have to carry more than 6 liters of water or so at a time.  The trail was a mellow 40 mile traverse of the park, trending downhill and passing through a multitude of desert ecosystems along the way.  It would be a perfect trail for me to not stress my IT band too much and still get some time on my feet.  More importantly, it would be a perfect trail for Greg, who was legally blind – no cliffs, no rivers, only cactuses, and they won’t kill you – only hurt for a bit.  A bit to my surprise he said “Yes” and booked a flight into Palm Springs.  We were doin’ it!

Greg is my homie dating all the way back to middle school – we shared 5 years together in Louisville, Kentucky and raced bikes competitively all around the Midwest.  We had matching cars, matching musical interests, and matching family dynamics at home – he is the brother I never officially had.  And about 5 years ago, in a routine medical operation gone wrong, he lost all of the vision in one eye and 90% of the vision in the other.  Just like that his life was turned upside-down, and while he was thankful to still be alive, he immediately began mourning the parts of his life that he lost – cycling, driving, walking without being intensely focused on what he’s doing.

You hear about people that lose their sight adapting their other senses to somehow compensate, and while I still don’t understand how it works, I can say that I have seen it first hand.  Greg gets around the world surprisingly well for someone that literally can’t see – he has a guide dog that he occasionally uses, but most of the time he’s on his own, in familiar places, navigating smoothly.  I will never forgot the time we left our seats at the Greek Theater to use the bathroom and I totally walked by our aisle on the way back – he called out “Hey man, our seats are over there” as he lead us down the correct aisle.  It turns out that when the mind is focused on other things you can make do without vision.

He lived out here for a spell and during that time we perfected our skills running together – I could stay a few steps ahead of him, on his good side, and call out large obstacles like steps and curbs before we approached.  If we stuck to wide open fire trails we could cruise along no problem.  I had always thought that this desert traverse would be the equivalent of wide open fire-trails and provide an awesome route to hike together.

I buzzed down the 5, solo, in a rental car, which was a liberating experience in itself.  I say solo but in reality I was accompanied by Richard Simmons as I binge-listened to the Missing Richard Simmons podcast, rapt to hear about the rise and fall of America’s beloved exercise guru.  I picked Greg up at the airport and after a night at the luxurious Desert Hot Springs Spa and Resort we headed into the park to cache the water.

The water drops went smoothly and we only got the Nissan Sentra stuck in sand once.  Four water pickups would allow us to fill up on water at least once a day, and the weather looked like it would cooperate too with a high of 75 during the day.  We parked the Sentra at the North Entrance to the park and desperately tried to pick up an Uber to take us to the Black Rock Canyon trail head about 40 miles to the west.  Unfortunately, Uber is not as popular in the middle of the desert as it is in the San Francisco Bay Area.  After an uneventful hour of attempting Ubering, and another uneventful hour of attempted hitch-hiking, we were about to begin the slog on the highway into 29 Palms when I gave Lyft a shot – and scored a ride within 2 minutes!  And not just any ride, George in a Model X Tesla!  The Joshua Tree gods had hear our pleas – this was certainly boding well for our hike.

George explained that he cruised to the desert from Palm Springs to charge up his Tesla for free at the Indian Casino and then tried to pick up a ride back home. Instead, he picked up us.  But he was super nice, the car was super dope, and he managed to resist our pleading for him to really “gas” it and show us what the car was made of.  But he did take us right to the trail-head which was a huge relief – walking to a car at the end of a through-hike is infinitely better than having to get back to the beginning after four days in the desert.

And thus we began – what followed was four days of pure bliss and meditative silence.  We had way too much stuff and our packs were heavy.  This was a symptom of literally throwing the trip together in 24 hours, me over-packing food and snacks (my wife is usually the chief rationing officer and I rebounded a bit too far in the other direction when I bought all the food), and it being about 8 years since I had been on a proper backpacking trip.  But the major complaints were pretty much contained to the first day and our packs got lighter and lighter as we progressed.

It had been a decade since a kid-free backpack (we traversed nearly 500km across the Alps with our youngest son in 2010) and I had forgotten how much I loved the flow of backpacking – waking up, making coffee, packing up your camp, and walking.  All day long.  One foot in front of the other.  No rush, no hurry, no noise.  Walking until you’re ready to stop at the end of the day, throwing your pack down, sleeping under the beautiful stars, and repeating the next day.

In so many ways it’s the exact same feeling as long-distance running just at a slightly slower speed.  The nice thing was that I was able to notice things and details that I normally would have run right by (and in places where I had run this trail before, I had!).  Some of the freshest pictographs I have ever seen in Joshua Tree, the ruins of a miner’s encampment just east of Ryan Campground, and numerous break spots with panoramic views of the desert.

And while we were never pushing it from an aerobic level, I have to say that walking 6-8 hours a day with a heavy pack on is pretty amazing training for trail running.  My same muscles were sore at the end of the day but I felt like I was working them in a low-impact manner.  My IT band never flared up and my head was the clearest is has been in years.  It turns out that slowly walking with a heavy pack was exactly the tonic I needed for my canceled peak week of running. 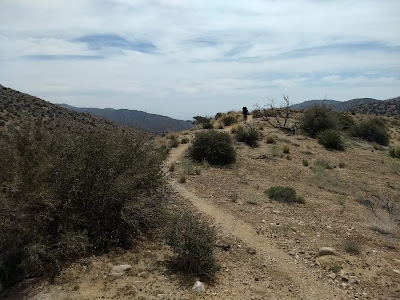 More importantly I was able to spend some truly quality time with my best friend.  We spent hours talking and chatting about nothing, hours talking and chatting about things of deep importance to us, and hours of complete silence, walking single file through the desert.  Greg was able to lead the entire hike – he developed an uncanny cactus radar that kept him out of trouble with the pokey plants, and I redirected him a handful of times as we crossed the wide open sandy washes of the desert.  And while the LA hipsters were definitely in full effect in the rest of the park, we saw only four other people on the entire length of our trail (except of course the campgrounds where we stopped to pick up water).  The saving grace is that the back-country of Joshua Tree is more desolate and quiet than ever, and I feel blessed to have been able to spend four days out there with one of my oldest friends.

All in all, it was exactly what the doctor had ordered, and an age old remedy that has been followed for millennia.  Pack up a small bag and head deep into the desert, my friend – because peacefulness and clarity surely awaits.  Thanks again to the spirits of Joshua Tree for such an epic experience – you fully know that I will be back! 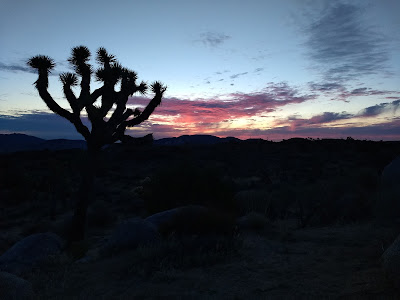