As you all know and have read, I was slumping a bit at the start of the year. I got really sick twice with a deep respiratory illness I and couldn’t really get back on my training blocks and running feet. It was tough for me to find motivation and I was struggling to even get excited for my first goals for the year – an attempt at the Zion Traverse over my Spring Break at the end of March, and what would be my fourth running of the Canyons 100k on the Western States Trail. Near the beginning of March I finally found a bit of consistency and started laying down some miles and vert again. I was starting to feel better, string together a couple of “medium length” efforts around 8-10 miles…. and then the world as we knew it drastically changed.

To be honest, I was not surprised nor even alarmed at the sudden arrival and onset of the Coronavirus pandemic. I had been following the news coming out of China since early January and had even started talking about it in my classes at school – so much that the kids demanded that we start each day with a “Coronavirus update”, even back in early February. On Back to School Night on February 7, I refused to shake hands with the hundreds of parents that streamed through my classroom, and obsessively sanitized surfaces every chance I got. In late February I started emailing our administration and superintendent – what was our plan for online learning should we need to cancel school? Shouldn’t we begin distributing Chromebooks now to the kids? Many of my emails were simply ignored and never replied to, and the people that I spoke to in person just kind of smiled and nodded. It was business as usual up until March 14th.

My stress and anxiety with the whole COVID breakout was very much front-loaded. I was freaking out before most of the people around me, and much of my freakout was due to the fact that no one else was freaking out. We stockpiled grains and supplies, got a bidet for our toilet (life-changer), secured our local food sources (being plant-based really pays off in times like this) and hunkered down, hoping for the best. Then on March 15th the first Shelter-in-Place orders in the whole country hit Alameda County, as well as the surrounding counties in the Bay Area. We were being instructed to stay in our homes and only leave for “essential activities”. I remember heading to Tilden with my family right after hearing the announcement and seeing all the people walking dogs. Suddenly it clicked in my mind – walking a dog would surely be considered an essential activity! All we needed to do to stay active on the trails would be to go and adopt a canine companion.

Luckily, “exercising outdoors” was deemed an essential activity by the City of Berkeley. We wouldn’t actually have to get a dog (two kids was plenty to keep our hands full), and we could still keep going outside. And so on Saturday March 21 I headed over to my normal start in Claremont Canyon for a loop up to Vollmer peak – with literally the rest of the Bay Area. It was an absolutely gorgeous day, many people had been cooped up in their houses all week, and I finally realized how many people actually spent time in movie theaters, restaurants, and shops. The trails were more packed than I had seen them in my twenty years in the Bay. Large groups of friends hiking together, folks four deep across the trail, people wandering around on the single track looking at maps, headphones plugging up their ears. My anxiety shot up like a rocket and I freaked out – I had survived a trip to Trader Joe’s the day before, and I literally felt that my run through the hills was more risky than a grocery trip.

Inside I was grappling with my emotions – obviously part of me was happy that all of these people were outside, exploring the outdoors. The other part of me was feeling angry and territorial of my trails. I was so excited to be able to keep running during Shelter-in-Place and now it didn’t even feel like the trails were a safe space. I was not the only runner in this position, as races were being canceled left and right and we were watching our entire scheduled season evaporate before our eyes. It was then that I realized how future-focused we long distance runners are – We choose and fixate on goals that are months or even years down the road, and as a whole we are very good at achieving those goals (even if it means sacrificing other things in our lives). I caught myself telling someone that “I was supposed to be in Zion this week…”, immediately realizing when I vocalized it that it was not true. I was not “supposed” to be in Zion that week, I had been planning on it. Plans change. I was “supposed” to be right here, at home, with my family. The real question was – good I still be an ultra-runner if I was only focused on the present?

My anxiety was so great from that run that I stayed off the trails for more than a week after that. It turned out that the roads were actually much more open and clear – and with hardly any traffic on them, you could literally run down the bike lane or even middle of the traffic lane and stay clear of other people. I dug up a few of my older road loops and even found some new ones, playing on the steep streets in North Berkeley and coming up with different variations of power hiking up Marin and working my way down. On the next weekend, in the normal long trail run slot, I took to the streets through Tilden, which turned out to be a good bit of fun. A side effect of the road running was that my aerobic fitness was coming into form nicely, and I was even beginning to develop a bit of mid-range speed that I hadn’t found simply slogging around the hills. At this time in my life I was enjoying the “auto-pilot” that was road running – I savored the time that I could just turn my mind off and let the legs go for it.

Gradually I started heading back to the trails more and more each week, working on some new loops that stuck to the wider fire trails and lesser known single-track to minimize my encounters with other people. I began wearing a Buff as a mask, before they were suggested or required, because I felt like it certainly wasn’t hurting to shield other hikers and runners from my breath, spit, and snot. Every run I had a few awkward encounters of folks walking down the middle of the fire trail instead of the opposite side, and I finally developed the technique of stopping in my tracks and politely pointing to the other side, suggesting that they move over. They always politely complied – I think many people are just not used to thinking about their position on the trails in relation to others, which in pre-COVID days, didn’t really matter as long as you didn’t bump into someone.

And now we’re in May, still officially Sheltered-In-Place, but with more and more people venturing out all the time. I’ve found a nice balance to my anxiety and running – I just finished my third 40 mile week in a row, with about a 70/30 mix of trails and roads. I discovered the trick that if I leave my house at 5:00 AM for my long run each week I can be heading down the fire-trail while the rest of the world is just parking to start their hike up. I pulled off a brilliant night run through the park, leaving at sunset on a Wednesday, and saw two other souls the entire time (neither of them on trails in Tilden). I haven’t driven to the start of a run since that fateful day on March 21st. I’ve even begun setting short-term goals for myself (and succeeding), completing a super fun “Mile-an-Hour Challenge” as well as a Door-to-Door 50k (write-ups coming soon!)

There’s lots of talk about Silver Linings during this global pandemic, and I’ve got many to celebrate. My family is healthy, I have a house, food on the table, and a job that is currently paying me to work. But the other Silver Lining here is that this dramatic change in my running routine was somehow just enough to bust me out of my slump. Running during the COVID pandemic had to look different, and I was forced to break out of my shell and weekly routines and really find different ways to explore area around me. I’ve found new trails, new road loops, and new ways to enjoy myself in the parks, while reducing my overall anxiety and getting some fresh air outside. I’m staying present, both on my runs and in my training, and I’ve found a level of fun that had managed to slip away for a bit after so many packed years of scheduled races and events. I love running and I love my time in my local hills – it took a global pandemic for me to remember that simple fact. And for that, I am truly grateful. 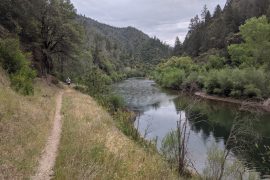