After a fun and packed holiday season where we traveled to see both sets of grandparents, I’m finally positioned next to a warm (gas) fireplace at my home, cup of coffee in hand, ready to attempt to process some of this past year. It was my most ambitious year of running yet, and while I’m five weeks in to my longest forced rest ever due to a stubborn case of posterior tibial tendinitis, this past year is still going down as a roaring success in my book. I hit the perfect balance of large race objectives and big adventure pushes, from another summer in the Alps where I finally ran UTMB to surviving a Phish show and a Rim to Rim to Rim less than 24 hours apart.

I can’t talk about 2021 without mentioning the loss of my good friend and running partner Lucas Horan. The year started off with a whirlwind of thoughts and emotions, as Lucas had been missing since Christmas Day and our family and the local trail running community was in a full-on search mode for our buddy. The grieving was tough for my family, as even the kids had formed special bonds with Lucas, spending time fishing and plotting off-trail routes with him deep in the Sierra during our John Muir Trail trip in 2020. The East Bay Quadbanger crew eventually sent Lucas off on his next big run with a Sunday Service and Harvey Quadbanger Descent, hooting, hollering, and jumping gates the entire way while gorging on M&Ms and carrying flowers in our vests. For me, the loss of my friend was an excuse to examine the way in which we approach life, especially in the throws of a seemingly never-ending pandemic. I was determined to greet this past year with a new vigor and “What Would Lucas Do?” mentality – saying “Yes” to more opportunities, dreaming bigger, and really thinking if things were in fact impossible before immediately dismissing them as bad ideas.

February was a month of excitement and intimidation in our house, as I was finally drawn in the lotto to run in UTMB and my wife was chosen in the Tor des Geants lottery (after neglecting to tell me she had even put her name in).  We went all in and began planning for a summer in the Alps that would both be a memorable family trip and also provide the rigorous training needed to prepare for two of the biggest bucketlist races on any ultra runner’s dream list.  We both hooked up with coaches and I made the most of my Zoom distance learning schedule, often teaching my last class already in my running clothes so I could literally dash out the door at the end of the hour and still be back from the hills in time for a sweaty afternoon meeting. While the drawbacks to Zoom teaching and meetings far outnumber the positives, I do miss the ability to teach in my running shorts covered with Tilden clay and reeking of sweat and salt.

My spring training schedule focused on a return to organized racing as we all crossed our fingers that the 2021 running of the Canyons 100k would actually happen. Chaz and the E3 crew navigated a mess of Covid protocols and changing course routes, and managed to pull off an awesome race in the end, hosting a homecoming for NorCal runners that were itching to get back on our favorite local trails. I loved the new point-to-point format, and made a bunch of new friends along the way, even picking a few people’s brains about their previous experience at UTMB. Maureen followed up the next month with her first successful 50 mile run at the classic and low-key Silver State 50/50, and I punctuated my US training block on my birthday with my first ever Quad Dipsea, fueled by donuts, friends, and the motivation to stack as much vert as I could before heading off to the big peaks of the Alps.

After a quick visit to see my folks on the East Coast in June, we picked up the family and moved to Trient, Switzerland, a quaint hanging glacial valley just a few miles from my wife’s family’s chalet in Vallorcine, France.  We had picked Trient as a landing spot for our summer trying to find a more peaceful and rural mountain experience away from the hustle and bustle of Chamonix, while also looking at Strava heat maps and trying to ascertain where the best trail access in the region really was. What unfolded over the next two months can best be described as our family like a group of kids in a candy store – we crushed big runs and loops around some of the best trails in the world, hiked up to ancient glaciers and dinosaur fossils with the kids, and spent the down moments hunting for chanterelles in the forest and melting raclette for dinner.  In the first week of August we shipped the boys away with the Guides de Chamonix for a week-long overnight backpacking trip around the TMB, and we headed over to Italy to run and scout the Northern section of the TOR course on the Alta Via 1. We all got some much needed space, and Maureen and I got some precious time together to run big passes in the Italian Alps, eating as much cheesy polenta as we could manage along the way. The entire summer culminated with the realization of one of biggest life dreams, a successful lap around Mont Blanc and an extremely well executed race at UTMB.  It seemed like a magical way to say goodbye to the mountains for the summer, and after my wife came within one single pass of sending the Tor des Geants we all regrouped again in Berkeley, California to re-enter “the real world”.

Re-entry is always tough after our summer trips, but this one felt especially difficult. The city felt much more urban than usual after our summer in a tiny Swiss hamlet – the car horns louder, the pollution greater, the traffic and people more aggressive than our memory. We hopped immediately into school, and for me it was the first time back in person in front of students in a year and a half. It was a breath of fresh air to be teaching to real live kids again, and yet at the same time the collective pandemic trauma of the Bay Area was palpable and hard to manage. Of course urban centers like where we live have to immediately lock down and put shields and walls up, yet we couldn’t help but think that the Italians were on to something as well, prioritizing their community gatherings and visits and trying to weigh the cost-benefit of a life barricaded to the outside world. We soldiered on and did the best that we could this fall, sprinkling in adventures and escapes to keep us going from week to week.

A fall highlight for me was the second annual PTRT Phishhead runner’s group meet-up in the Grand Canyon last October. I love Phish almost as much as I love running, and in fall of 2020 we put together a small and scrappy Zion Traverse with some friends from an online Phish message board. We started planning a 2021 trip last spring, and settled on the Grand Canyon for a Rim to Rim to Rim attempt. After polling possible participants, we selected the third weekend of October for these running shenanigans, and less than a week after folks booked tickets and campsites our favorite band from Vermont announced a Friday night show at the Desert Sky Pavillon in Phoenix, on the same weekend we had already selected for the R3. Icculus was clearly on our side, and all the sudden our Phishhead running trip got turned up to 11 as we caught a show on Friday night and dropped into the Canyon less than 24 hours later with a midnight start down South Kaibab. The Canyon makes cowboys, as the saying goes, and we all emerged slightly bruised and battered but with our souls polished and shined after an amazing weekend with friends and live music in one of the most beautiful places on the planet.

November saw us making our annual Thanksgiving pilgrimage to our beloved Joshua Tree, and a week of spectacular weather and desert exploration. Our friend Jenn joined us all the way from Scottland, and the Joshua Tree Fatass 50k had a record number of starting participants as four of us embarked on the crazy fun journey across the high desert. It was cool to experience the park again with Jenn, as her mind was blown by the crazy rocks and trees and she kept exclaiming “This is AMAZING” as she stopped to take pictures and reapply sunscreen at every opportunity. In retrospect, I probably should have sat this one out, as the sandy running flared up my tendinitis pretty bad and forced me to take the entire month of December off. I am a firm believer that forced rest is good, but next time I am going to try to not be so stubborn and take it more on my own terms.

It’s a weird feeling to let the adrenaline and dopamine finally dissipate and disappear at the end of such a phenomenal year for our entire family.  As we are apt to do, we haven’t stopped dreaming big, and it turns out the call of the mountains from the summer might finally be strong enough to pull our whole family over there for longer than a couple of months.  We are in the process of putting some large pieces together to spend the academic year in our beloved French Alps for 2022-2023, as I take a sabbatical from work and we see what it’s like to spend four full seasons at the foot of Mont Blanc.  As the remaining days of 2021 fade away, I feel equal parts anxiety to move to an entirely new place, in a foreign country, with a language that I am only halfway decent at, and a promise of freedom and spiritual peace that I haven’t really felt since August.  For one of the first times since we had kids, there’s a chance to look forward and really not know what is going to come next.  And that, in itself, is freaking exhilarating.

Wishing you all much love, light, clean ridgelines and buttery singletrack in 2022. 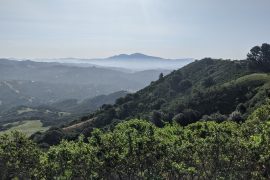